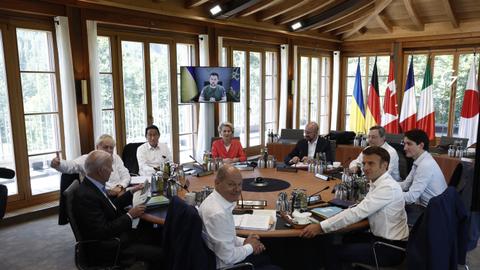 Russia is stepping up its attacks on Ukraine as world leaders meet in Europe to discuss new sanctions against Moscow as the conflict enters its 124th day.

Ukrainian President Volodymyr Zelenskyy called for air defense systems, more sanctions on Russia and security guarantees as he addressed leaders at the G7 summit, a European official has said.

Addressing the summit in the Bavarian Alps via video link, Zelenskiy also asked for help exporting grain from Ukraine and for reconstruction aid, the EU official said, speaking under cover of the ‘anonymity.

It could be seen on a television screen next to the round table where the leaders sat in the secluded luxury hotel Schloss Elmau.

The United States has announced new G7 sanctions targeting the Russian defense industry in a bid to hamper the Kremlin’s ability to maintain the military machine during its offensive in Ukraine.

Regional authorities have urged civilians to urgently evacuate the eastern Ukrainian town of Lysychansk, which is under attack by Russian forces.

“Dear residents of the territorial community of the city of Lysychansk and their relatives! Due to the real threat to life and health, we call on you to urgently evacuate,” wrote Serhiy Gaidai, the governor of the region of Luhansk, on the Telegram messaging app.

He said the situation in Lysychansk was “very difficult”, but did not say how many civilians remained there. About 100,000 people lived in the city before the start of the Russian offensive in Ukraine on February 24.

The United States will send an anti-aircraft system to Ukraine

As the Group of Seven economic powers pledge long-term support to Ukraine, the United States is preparing to announce the purchase of an advanced surface-to-air missile system for kyiv.

The United States is buying NASAMS, an anti-aircraft system developed by Norway, to provide medium and long-range defense, according to a person familiar with the matter, who spoke on condition of anonymity. NASAMS is the same system used by the United States to protect sensitive airspace around the White House and the US Capitol in Washington.

The additional aid includes more ammunition for Ukrainian artillery, as well as counter-battery radars, to support its efforts against the Russian assault in Donbass, the person said.

The Group of Seven economic powers are set to announce an agreement to pursue a cap on Russian oil prices, aimed at reducing Moscow’s energy revenues, a US official has said.

The move is part of a joint effort to support Ukraine that includes raising tariffs on Russian products and imposing new sanctions on hundreds of Russian officials and entities supporting the four-year conflict. month.

Leaders were finalizing the deal to seek a price cap at their three-day summit in the German Alps. The details of how a price cap would work, as well as its impact on the Russian economy, were expected to be worked out by G7 finance ministers in the coming weeks and months.

G7 agrees to use Russian trade tariffs to fund Ukraine: US

G7 leaders have agreed that money raised from higher trade tariffs imposed on Russian exports should be funneled into aid to Ukraine, the White House said.

President Joe Biden and other G7 leaders will “seek permission to use revenue generated from any new tariffs on Russian goods to help Ukraine and ensure that Russia pays the cost of its war,” said a senior US official.

New Zealand to send over $2.8 million in non-lethal military support to Ukraine

New Zealand has announced an additional $2.8 million in non-lethal military support to Ukraine, according to an official statement.

The support was announced just a day before the NATO summit in Madrid which Prime Minister Jacinda Ardern is expected to attend.

“We are also contributing $4.5 million through the NATO Trust Fund for Priority Non-Lethal Military Supplies. This includes items such as military first aid kits, fuel, equipment communications and rations. This is in addition to the $4.24 million from the NATO fund announced in March,” Ardern said in a statement.

Rescuers search for survivors in the rubble of a building near the center of kyiv, hit by one of four Russian cruise missiles.

Mayor Vitali Klitschko says he is meant to ‘intimidate Ukrainians’ ahead of Tuesday’s NATO summit in Madrid pic.twitter.com/OqYCCHiYRP

Discussions on an import ban on Russian gold are ongoing and should take place with partners in the European Union, German Chancellor Olaf Scholz told ZDF television.

The European Union reacted cautiously on Sunday to a plan by Britain, the United States, Japan and Canada to ban imports of newly mined or refined Russian gold.

Energy ministers from European Union countries will discuss options for how they could jointly reduce gas demand, as the bloc grapples with Russian supply cuts and prepares for possible new ones supply shocks.

“I plan to present to ministers the concrete steps that I think we need to take, both on the member state side and on the Commission side, to be better prepared,” EU Energy Commissioner Kadri Simson told her meeting. arrival at the meeting of energy ministers. in Luxembourg.

The Commission will present an EU plan to coordinate preparations for further gas supply shocks in July.

The conflict in Ukraine could allow illegal drug production to flourish, while the future of the opium market hinges on the fate of crisis-ridden Afghanistan, the United Nations has warned.

Previous experience from the Middle East and Southeast Asia suggests that conflict zones can act as a “magnet” for the manufacture of synthetic drugs, which can be made anywhere, the report said on Monday. United Nations Office on Drugs and Crime (UNODC) in its annual report.

“This effect may be greater when the conflict zone is close to large consumer markets.”

Ukraine’s ability to produce synthetic drugs could increase as the conflict continues, he added. “You don’t have police going around and stopping labs” in conflict zones, UNODC expert Angela Me told AFP news agency.