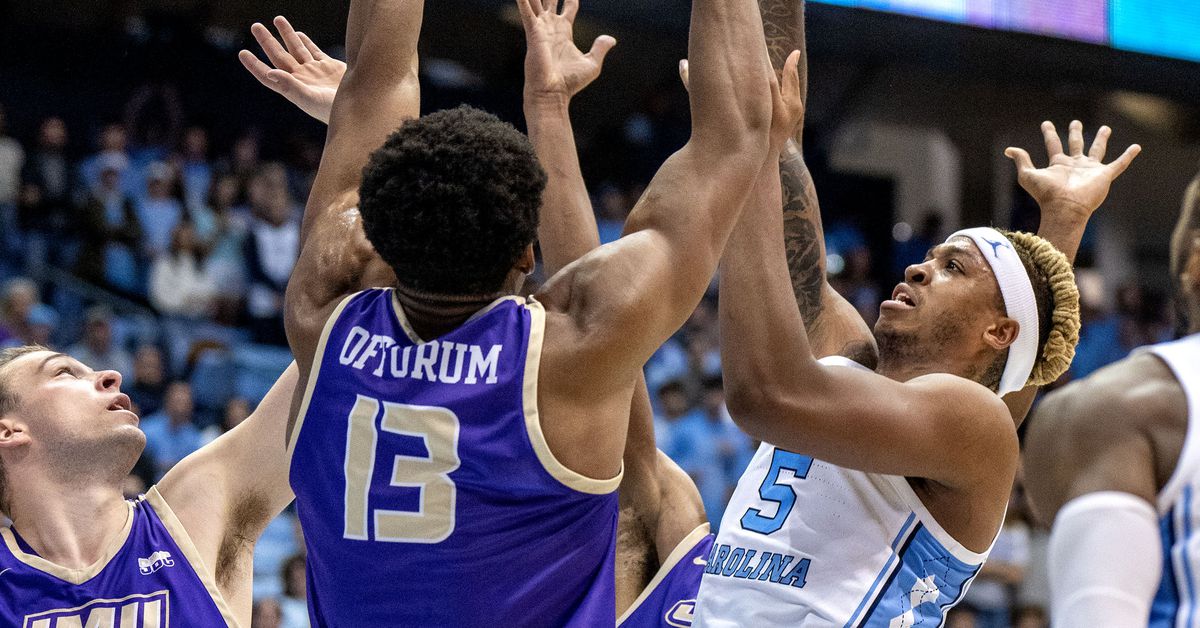 After Tuesday’s tough outing against Gardner-Webb, the first hints of real concern began to creep in about Carolina basketball. The win was uninspiring, Hubert Davis talked a lot about yellow flags, and the team coming to Chapel Hill on Sunday had been an attacking juggernaut – albeit against fairly weak competition. The team just seemed to be missing…something…from the team that made the incredible run at the end of last season.

After Sunday, those worries are a little less poignant.

The Tar Heels took a 19-point lead in the first half, played virtually tied in the second, and earned their fourth victory of the season, 80-64. So what did we learn from our last home game before December 10 (!)?

Despite the stellar second half against College of Charleston, a big part of the concern about the season was how Bacot hadn’t really considered the Tar Heels’ scoring so far this season. Although he played 36 minutes on Tuesday night, he only had ten points and didn’t build the strength he needed for his team. Now is it him or are his teammates not forcing it?

It turns out it’s a bit of both. On Sunday, Bacot was a force, picking up 19 points and 23 rebounds. He scored a double-double at half time as he took advantage of his height advantage, going strong until the paint and seemingly after every loose ball. There had been jokes that part of the reason his numbers were so strong was that he was missing rabbits and getting offensive boards, but he grabbed fifteen DEFENSIVE rebounds and had several “you better get away from me” on his face. It was by far his best game of the season, although not his best attacking performance, as not only did he work to win the ball back, but his teammates made sure he caught it. This is a good sign as the competition is about to intensify significantly.

Puff Johnson is back

It was a surprise. Word had come from Carolina that Puff had been given the all-clear earlier in the week, but would not be seen in a game before their game against Portland in Portland. Yet when the horn sounded at 4:35 p.m. in the first half, Johnson came running on the floor. Obviously, once back on the pitch, he quickly integrated into the team, as he didn’t leave the pitch until 12:43. It’s a pretty decent run for someone who missed his first three games.

Johnson only scored six points, but it was still good enough for him to be the top scorer from the bench, and more importantly, he earned his minutes by being a pest in defense. Carolina’s defense as a whole was really good, holding the top Dukes to their season-low point total by far. It’s a good sign to see him on the pitch, confident, striking and able to give up a good number of minutes again. As Matt noted after Gardner-Webb, it’s pretty clear the Tar Heels missed it. It’s probably no coincidence that his first game resulted in Carolina’s best game of the year.

The good news is that with the return of Puff Johnson, Davis was able to rotate nine people in the game. The problem? All five starters played over 30 minutes, and there’s a good chance that without Caleb Love (30 minutes) at fault in the first half and Bacot (35) at fault in the second, their numbers would have been higher. In his first game of the entire season, Puff Johnson played 13 minutes. Donrez Styles never saw the floor again.

There is, however, a bright spot here. Seth Trimble clearly earned Davis’ confidence with 12 minutes of play and rewarded his coach with 2-4 shots, including a successful three, a steal and a rebound. It shows how Davis is a different coach to Roy Williams in that he values ​​winning and isn’t afraid to use minutes earlier to try to motivate players. Williams would go for the long game, knowing games don’t matter anymore as much like conference play, trying to build a bench and give guys experience.

Now, a lot of that could be because you have a starting five that is none other than juniors, seniors, and graduate students. It’s much easier to go with the known than with the unknown, and since they don’t play again until Thursday, it’s probably more important to give the starters a heavier load so they can find their groove before the Phil Knight Invitational. It’s just interesting to note that there is a big difference in early season training by Davis compared to Williams.

It’s also very difficult to win three games in four days. Clearly the bench players are going to have to show some life in practice to get into these games, but don’t be surprised if you see a repeat of that scoreline in terms of minutes if the Tar Heels make it to the game. for the title. . Sometimes you just need to win the game.