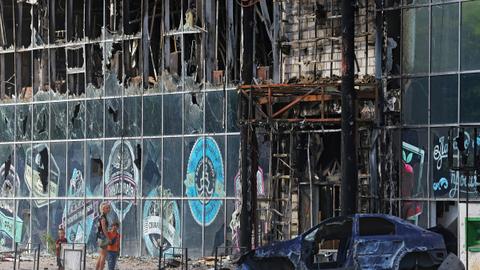 Ukrainian forces undeterred in efforts to ‘break’ Moscow’s will

President Vladimir Putin orders Russian troops to push their offensive deeper into the Donbass region of eastern Ukraine after Moscow forces seized the strategic town of Lysychansk in an ongoing offensive – which is now in its 132nd day.

Ukrainian President Volodymyr Zelenskyy said his armed forces were undeterred in their efforts to ‘break’ Moscow’s resolve to continue a nearly five-month conflict, while Russia’s Vladimir Putin hailed his army’s victory in the grueling battle of Lugansk.

As the conflict entered its next phase, Ukrainian forces established new defensive lines in the east of the country.

“There have been no significant changes on the battlefield in the past 24 hours,” Zelenskyy said in a video message.

“The Armed Forces of Ukraine are reacting, repelling and destroying the offensive potential of the occupiers day after day. We have to break them. This is a difficult task. It takes time and superhuman effort. But we have no alternative. “