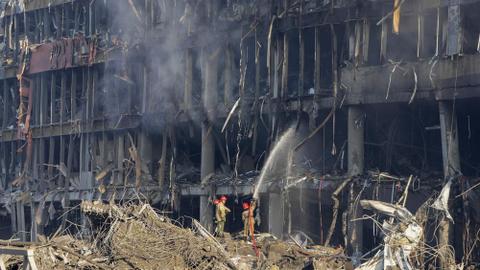 Ukraine will not seek NATO membership if Russia withdraws – Zelenskyy

Ukrainian Zelenskyy has said his country will be ‘destroyed’ before it hands over its cities to Russian forces, as he doubles down on his call for direct talks with Russia’s Putin as key to ending the onslaught of Moscow, which is now on its 27th day.

Ukrainian President Volodymyr Zelenskyy has said he is ready to discuss a commitment by Ukraine not to seek NATO membership in exchange for a ceasefire, the withdrawal of Russian troops and a guarantee of Ukraine’s security.

“It’s a compromise for everyone: for the West, which doesn’t know what to do with us vis-à-vis NATO, for Ukraine, which wants security guarantees, and for Russia , which does not want further NATO enlargement,” Zelenskyy said. late Monday in an interview with Ukrainian TV channels.

Zelenskyy said Kyiv would be ready to discuss the status of Crimea and the eastern Donbass region held by Russian-backed separatists after a ceasefire and steps to provide security guarantees.

“The latest situation arose as a result of Russia’s aggression against Ukraine, and Russia’s attempt to shift the issue to Japan-Russia relations is extremely unjustified and absolutely unacceptable,” the official said. Prime Minister Fumio Kishida in Parliament.

Japan “strongly protests”, he added, condemning Russia for its actions to “unilaterally change the status quo by force”.

2 Texas teams to kick off NCAA tournament in Fort Worth