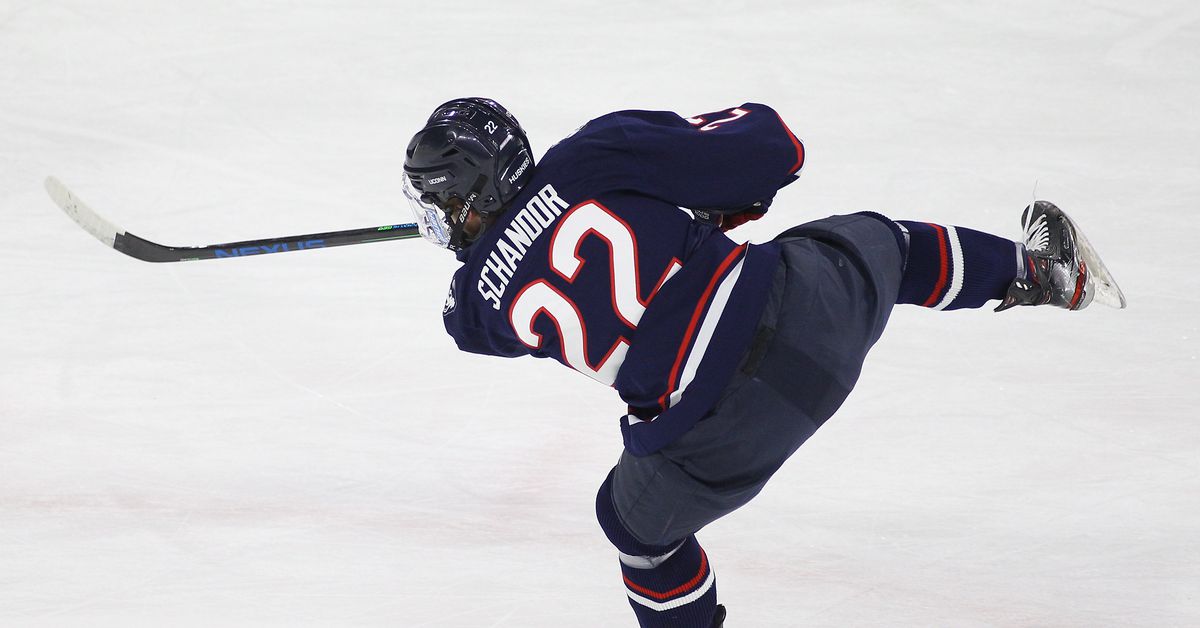 UConn Men’s Hockey took a 6-1 road win over the New Hampshire Wildcats to earn six points in Hockey East for the first time this season.

Hudson Schandor opened the scoring early in the first period before UNH tied the game in the last minute before intermission. Then the Huskies exploded with three second-period goals from Jachym Kondelik, Carter Turnbull and Vladislav Firstov and added an empty net from Artem Shlaine and an extra insurance goal from Ryan Tverberg to secure the win.

Darion Hanson had a few tough moments in goal early on, but he was big when it counted and stopped 31 of 32 shots he faced.

For only the second time in 11 second-half games, UConn scored the first. Tverberg tore the puck off the boards as he entered the neutral zone and delivered a centering pass to Schandor, who hit it home to give the Huskies a 1-0 lead four minutes later .

Even with the early lead, UConn had to survive a few close calls. Hanson made a kick save to stop UNH moments before the Huskies scored and after the goal the puck went through the goalie but Schandor cleared it off the goal line.

In fact, the Wildcats controlled much of the opening period. While the shots were only 15-13 in favor of the hosts, they created far more dangerous chances but were denied by timely plays from Hanson and the UConn defence. UNH finally broke through in the final minute of the first period when Tyler Ward buried a rebound in front of goal, making it 1-1.

The Huskies, however, made the necessary adjustments during the first intermission. UConn came out on the right foot and immediately made life more difficult for Mike Robinson and the Wildcat defense.

Just over four minutes later, Kondelik restored the lead to the Huskies. Harrison Rees made a perfect diagonal down pass senior and beat Robinson with a deke and fired him into the dislodged net for the score.

Over the next seven minutes, the two teams mostly exchanged shots that completely missed the net. Then UConn put the game aside in the space of two minutes.

First, Turnbull forced a turnover at the Huskies blue line and took it along the ice for a breakaway goal to push the lead to 3-1. Two minutes later, Firstov redirected a shot from the blue line by Jarrod Gourley to make it 4-1.

Huskies here in the 2nd period.

Vladislav Firstov with a nice deflection on a shot from Jarrod Gourley. UConn with a 4-1 lead at 1:46 p.m. pic.twitter.com/0CV6UgZba7

The third period featured little action as UConn slowly let the clock bleed. UNH’s best chance to cut the deficit came when he hit the post, but other than that he didn’t challenge Hanson much, even on a late power play.

Shlaine scored an empty net to seal the game and then Tverberg added a six from a late penalty for good measure to secure the 6-1 victory.

The Huskies’ shorthanded went 3-3 that day. They didn’t have a single power play.