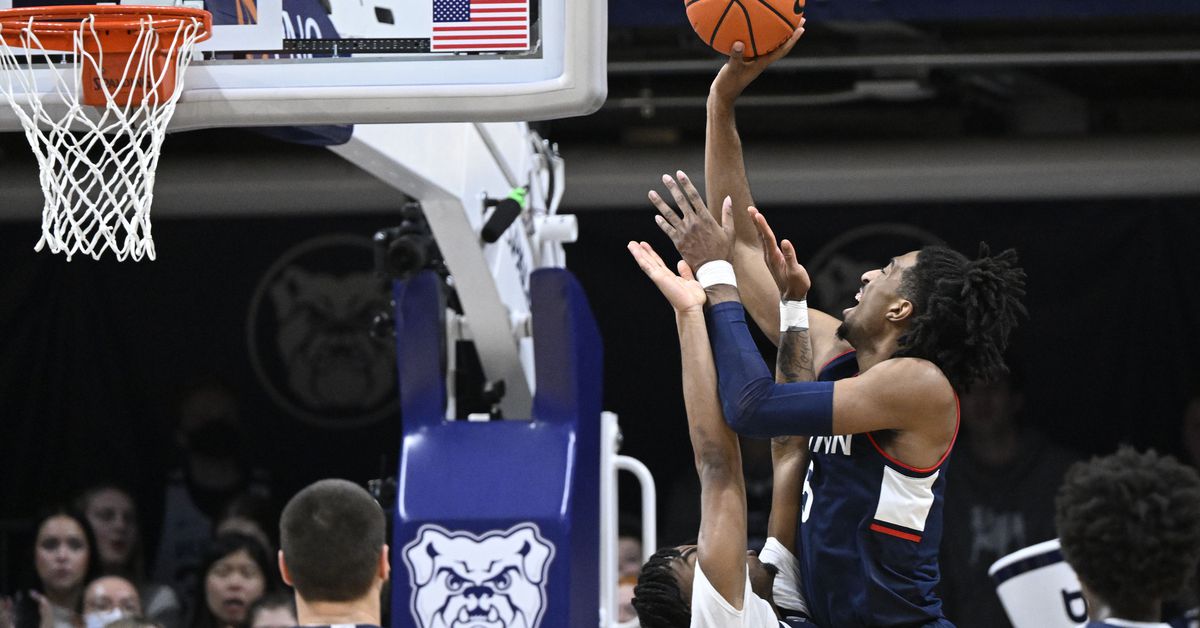 The No. 25 UConn men’s basketball team capped off “Alfred Pennyworth Week” with a solid road win over Butler, 75-56. The Huskies improve to 13-4, 4-2 in the Big East for their third straight win. They also managed to complete Butler’s series sweep for the second straight year, this time dispatching the Bulldogs twice in about 72 hours.

Super senior Tyrese Martin had a career-high 27 points, scoring 10 of 13 in the second half to help UConn pull away. Sophomore Adama Sanogo added 15 points and 10 rebounds, while Andre Jackson filled the stat sheet with six points, seven rebounds and five assists. Isaiah Whaley, after going scoreless against Butler 48 hours ago, responded with his own double-double with 11 points and 10 rebounds.

The Huskies struggled with the Bulldogs in the first half, shooting 28.6 percent from the field and 18 percent from three. But thanks to Martin’s 25 points in the second half, UConn were able to correct themselves and avoid what would have been a Quadrant 3 loss.

It was very clear from the jump that these two teams knew each other too well, with hard-to-find buckets on both sides. Butler made a bigger effort to face Sanogo on the inside, while UConn’s length continued to bother the Bulldogs on offense.

Coverage on the basket clearly started to frustrate the Huskies, as missed shots were quickly followed by turnovers and silly fouls. Despite nine points from Sanogo in the first half, the trio of Cole, Martin and Jackson shot a combined 2-15 heading into the break. It was exactly the type of play Butler — 195th in KenPom’s adjusted offensive efficiency — needed to play to steal this one. Still, despite the anemic offensive display, UConn only entered the half down four. Additionally, Whaley returned to his work as a yeoman, and there was a promising streak featuring Jalen Gaffney as an off-guard.

UConn regained the lead for good just three minutes into the second half thanks to an 11-0 run paced by Martin. The backcourt was finally starting to come out in transition, as Sanogo showed improved passing shots from the post. A backhand from Whaley extended UConn’s lead to seven with 8:46 remaining, and it looked like the Huskies were in control.

Butler threw a three-quarter press to slow the Huskies, and as Whaley and Cole found themselves in bad shape, the Bulldogs continued to trail. That is, until a steal and slam from Gaffney followed by a nice post-up from Martin gave the Huskies their first double-digit lead. Martin finished the game doing a bit of everything; hitting three, breaking press and hitting back buzzer beaters. Simply put: In the final 20 minutes, Butler barely outlasted Tyrese Martin’s University 28-27.

Thanks to UConn for showing some serious balance after a freezing first half. Hurley’s team proved that even if the shots don’t fall, the defensive identity will stick. Easy looks are hard to find thanks to UConn’s length, physique and toughness.

Huskies depth was on point Thursday night; they picked up a road dub with their playmaker going 2-8 from the field. There are enough athletes and catalysts on this team that someone like Cole or Sanogo can get a night off and not have it all derailed. This is a good sign for March.

UNC Basketball vs. Wake Forest: How to watch