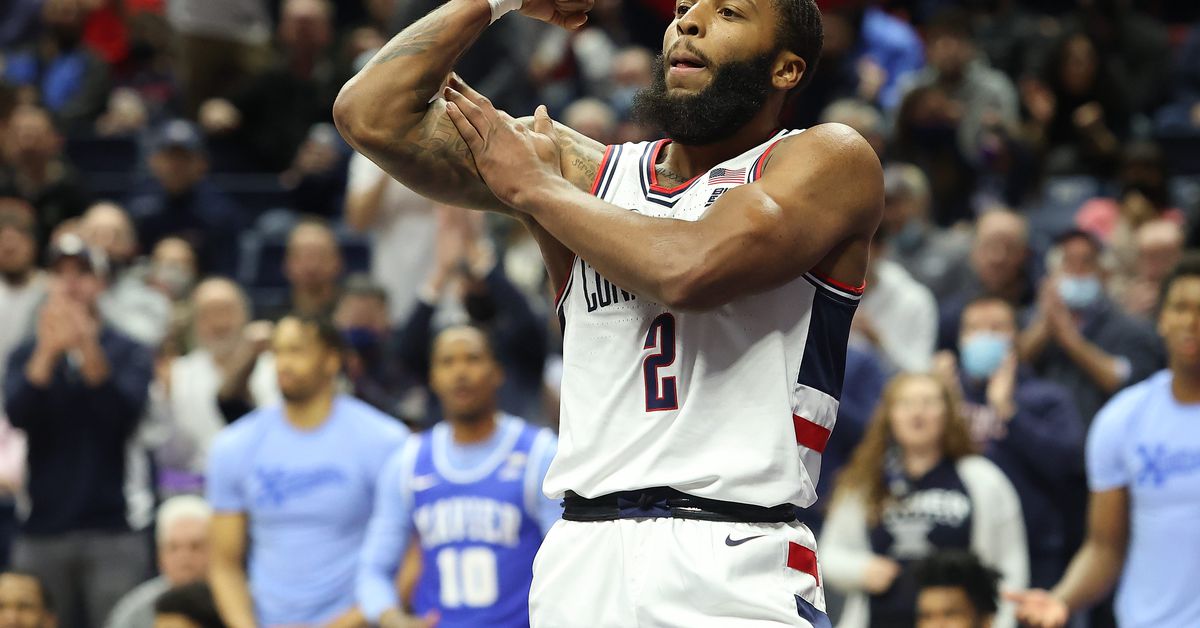 UConn’s No. 24 men’s basketball team dispatched the Xavier Musketeers, 72-61, on Saturday afternoon thanks to a scorching first half and steady play from senior point guard RJ Cole. The Huskies improve to 19-7 overall, 10-5 in the Big East, and are now in sole possession of third place in the conference.

Cole and Tyler Polley paced UConn with 16 points apiece, while Adama Sanogo added 15 points and nine rebounds. It was a two-half story for the Huskies; an almost perfect first half followed by a second half full of errors with 14 turnovers. UConn outscored Xavier 42-26, but gave up 20 points to the Muskies on turnovers.

Five consecutive empty trips to open the game temporarily tamed a loud and full Gampel Pavilion. The Huskies tried to establish the position early, but Xavier did a good job sending help to Sanogo. The fans were into it from the start, but it looked like the team was still warming up.

The first UCONN chant came after a Polley and one to cap an 11-2 push. The super senior came out of his 9-for-29 3-point shooting drop with 11 points in the first half on a perfect 4-4 from the field. A steal and slam from Sanogo, followed by three straight buckets from the sophomore star, helped UConn extend their lead.

Run by rowdy James Bouknight, who sat at the edge of the yard before he was asked to leave, Gampel was a madhouse.

Polley hitting from the outside really opened up the attack. Sanogo had noticeably more space inside to achieve an easy look. From there, the UConn offense sank like it rarely has all season. The Huskies entered the break on a 14-2 run to give themselves a 17-point advantage at halftime.

In the second half, Cole quickly committed his third foul and the turnovers started to pile up. Xavier reduced the deficit to four.

A Cole floater and Hawkins three gave UConn and a tense crowd some much-needed relief. At the under-eight timeout, the Huskies held a nine-point lead that looked shaky at best. Sure enough, the Huskies found themselves five with five minutes to play thanks to a pulverized attack and a downhill attack from Adam Kunkel and Colby Jones.

It turned into an RJ Cole spectacle from there, with the senior delivering four crucial buckets in a row when nothing really worked on offense. After a questionable selection of shots from Xavier in the stretch, Cole, Polley, Whaley and Hawkins hit enough free throws to close the game. Despite only two Sanogo field goal attempts in the second half, Cole and UConn’s team defense rallied to avert disaster.

It’s never fun to give back a lead as big as 18, but Xavier is No. 24 in the NET for a reason and they were fighting to salvage their season. Travis Steele threw a 2-2-1 press that completely confused a UConn backcourt without Cole.

Beyond that odd 10-minute streak to start the second half, it was a good day for UConn. Some teams would fall back after losing a big lead, but Cole and company kept their cool and held on for the win.

Next, the Huskies face No. 10 Villanova on Tuesday, tipping at 8 p.m. at the XL Center.