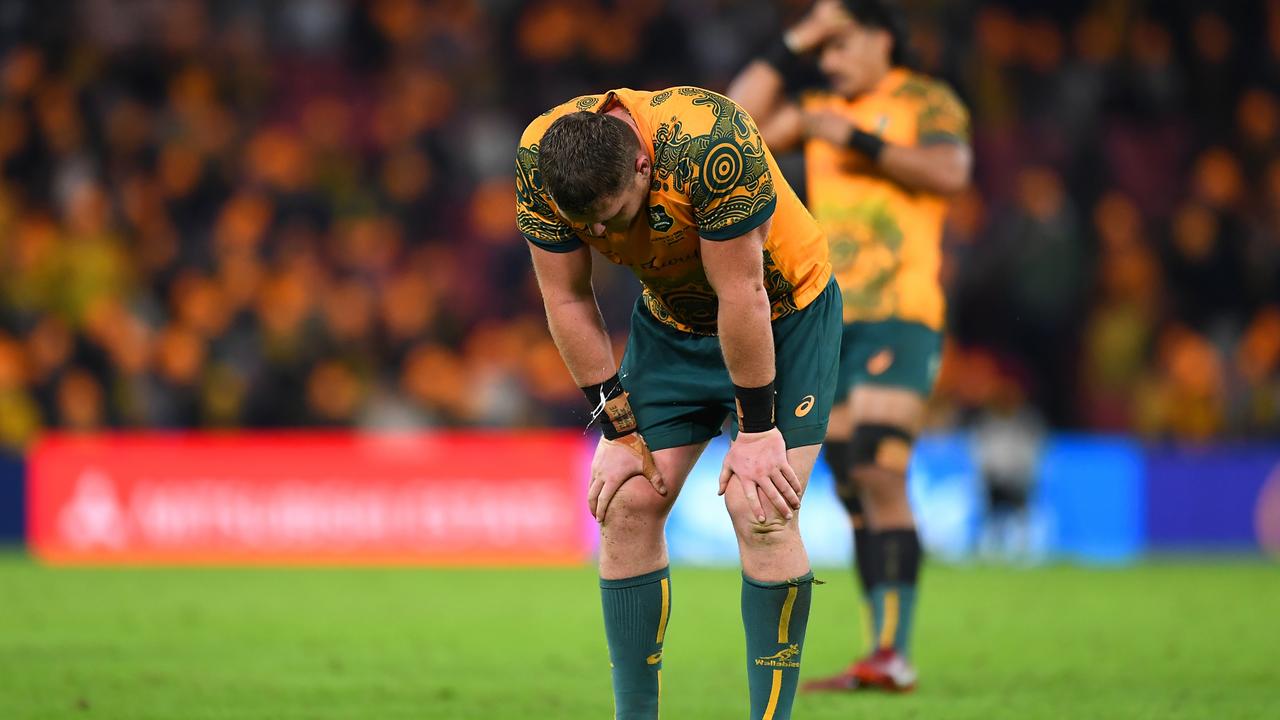 If Perth was the starter and Brisbane the main course, Sydney promises to be a dessert worth sticking around for.

After the drama of the Wallabies’ first Test win against England in Perth a week ago, few could have expected the sequel to rival it in Brisbane.

But England, with Eddie Jones’ head on the chopping block, came back to their strength and found tight-headed prop Ellis Genge – the beating heart of the Red Roses – with a bone to pick.

Despite a spirited and character-filled fightback from an injury-ravaged Wallabies side, England sent the series to a decider in Sydney after a thrilling 25-17 victory at Suncorp Stadium.

Jones’ white-clad men were pushed late by the Wallabies, who defied injuries – and a controversial yellow card to Izaia Perese – to get back into the game.

Stream over 50 sports live and on demand with Kayo. New to Kayo? Try free for 14 days >

Trailing 22-17 after tries from Taniela Tupou and Samu Kerevi, the Wallabies had all the momentum and England – facing four trotting defeats – looked like they were giving away another game.

But on two occasions the Wallabies failed to seize the moment as the first James O’Connor kicked halfway with space on the sidelines.

Then Folau Fainga’a failed to throw straight after Tom Wright – after going from wing to full back and back due to mounting injuries – pinned the ears back, kicked forward then hit Owen Farrell into touch.

What promised to be a game-changing moment fell flat. Heads fell as Fainga’a failed to hit the mark inside England’s 22-yard attacking line.

England won the resulting scrum and it wasn’t long before Farrell, after scoring more than 17 points from the kicking tee, launched Jack Nowell and the winger found space and meters.

The Wallabies managed to hold England at bay, but the visitors were awarded a penalty and Farrell punished the home side by extending the lead beyond a converted try.

Michael Hooper’s men weren’t gone, but when Jake Gordon hit Marika Koroibete with a forward pass in the 78th minute, it was almost over.

Hooper regretted not being able to try his luck late.

“It was always going to be tough,” Hooper said.

“We wanted to start the game very physically, and I think England won that battle tonight. They were throwing punches and going down our throat quite well.

“We were able to stop the bleeding there and get back in the game, some big moments at the end where we could have scored points, but the struggle in this team to stay in the performance and be there until the ending was really fun.”

The Wallabies were brave.

After losing four players to injury a week earlier, a fifth if you include Quade Cooper’s pre-match calf injury, more pain was on the way in Brisbane.

Later, substitute utility fullback Perese suffered a knee injury, before prop Scott Sio (pec) and lock Cadeyrn Neville (knee) were sent off in the second half.

Who Dave Rennie turns to next will be fascinating, as the Wallabies coach has few to turn to.

Suliasi Vunivalu is likely to make his Test debut while Reece Hodge, who returned from Australia A on Tuesday, could also be called up and feature at the back.

England, meanwhile, produced their best first half in rugby since the 2019 World Cup as their big men got to work, while Farrell returned to his best and finished with 20 points.

“We were beaten last week and we talked about coping, especially the forwards, and I thought we did that today,” said No.8 Billy Vunipola.

“I had a disguise from my dad last week so I had to improve my game today and hope he is proud and the rest of England. But today was for the boys.

“We did the tough stuff last week. Eddie is a nice guy, but also a badass, but we needed him last week and we had to perform.

After Petaia received a blow to the head which forced him off the pitch, Vunipola went on the scoreboard in the fifth minute after a driving maul.

It was just the start England wanted after suffering a massive spray throughout the week which left Eddie Jones’ head on the chopping block.

But Jones’ England delivered one of their best rugby halves since appearing in the 2019 World Cup final.

‘DELIGHTED’: The world order has been turned upside down as Ireland win their FIRST Test against the All Blacks in

Much like in 2016, when Jones’ England beat Michael Cheika’s Wallabies 3-0, Owen Farrell’s boot proved to be the difference in the game.

The inside center kicked four penalties in the first half to hurt the Wallabies.

As the world erupted after Perese was sent to the trash after failing to take an interception pass from a long jerky pass.

Eventually the Wallabies found a way back into the game and it came after Taniela Tupou and Angus Bell managed to earn a penalty during the scrum.

Moments later, Bell carried the ball forward and his partner in the front row followed to charge.

His try late in the first half managed to reduce the deficit to 19-7.

As England continued to score on the scoreboard with another Farrell penalty, Samu Kerevi ended Tupou’s push to the try line to score and close the gap to 22-14.

Noah Lolesio cut the margin to three points in the 54th minute when Marcus Smith was shown a yellow card for a deliberate knockdown on his part.

But the Wallabies couldn’t deliver the killing blow, as Farrell added three more and powered England to victory.

Relive all the action in our blog below!