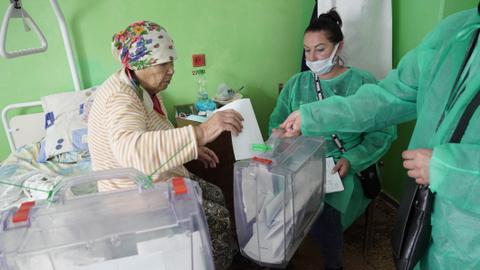 President Zelenskyy said Donetsk, Ukraine, was the country’s top priority because it was also Russia’s No.1 as fierce fighting begins the 216th day.

Annexation polls by Kremlin-installed authorities in four regions of Ukraine mostly controlled by Russian forces were due to end on Tuesday, with nuclear weapons threats from Moscow looming.

kyiv and its allies have denounced the votes as a sham and said the West will never recognize poll results that raise the stakes for Russia’s seven-month offensive.

Russian forces in Ukraine this month suffered serious setbacks in both the east and south of the country, which observers say prompted President Vladimir Putin to rush the vote to cement the authority of Moscow there.

Putin said Russia would use all available means to defend its territory, implying that after the annexation of the four regions – Luhansk, Donetsk, Kherson and Zaporizhzhia – Moscow could deploy strategic nuclear weapons to repel Ukrainian attempts to take back the territory.

Donetsk ‘No. 1 goal of Ukraine — Zelenskyy

President Volodymyr Zelenskyy described the military situation in the Donetsk region in eastern Ukraine as difficult and said it was the country’s “No. 1 objective” because it was also Russia’s No. 1 objective.

“The situation in the Donetsk region is particularly serious,” Zelenskyy said in his nightly video address. “We are doing everything to contain enemy activity. This is our No. 1 objective at the moment because the Donbass remains the No. 1 objective for the occupiers.”

Since Russian forces entered Ukraine at the end of February, they have occupied almost all of the Luhansk region and are making slow progress in the Donetsk region – the two provinces that make up Donbass.