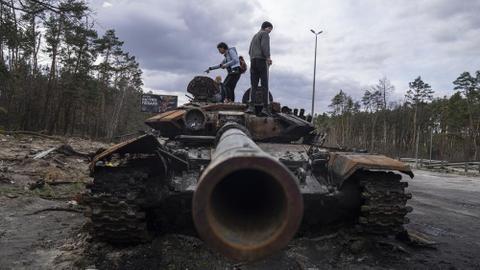 Russia may use chemical weapons in Ukraine – Zelenskyy

Ukraine expects Russia to start another push in the eastern Donbass region as Moscow focuses on seizing territory in the fighting – now in its 48th round.

Unconfirmed reports emerged on Monday suggesting chemical weapons were used in the besieged port of Mariupol in southern Ukraine. Britain said it was trying to verify this information.

UN: nearly two-thirds of Ukrainian children have fled their homes

Nearly two-thirds of all Ukrainian children fled their homes in the six weeks following Russia’s assault and the United Nations has confirmed the death of 142 youngsters, although the number is certainly much higher, said said the United Nations children’s agency.

Manuel Fontaine, director of emergency programs at UNICEF who has just returned from Ukraine, said the displacement of 4.8 million of Ukraine’s 7.5 million children in such a short time was something he hadn’t seen it happen so quickly in 31 years of humanitarian work.

Ukraine’s UN Ambassador Sergiy Kyslytsya claimed that Russia had removed more than 121,000 children from Ukraine and had drafted a bill to simplify and speed up adoption procedures for children. orphans and even those who have parents and other relatives.