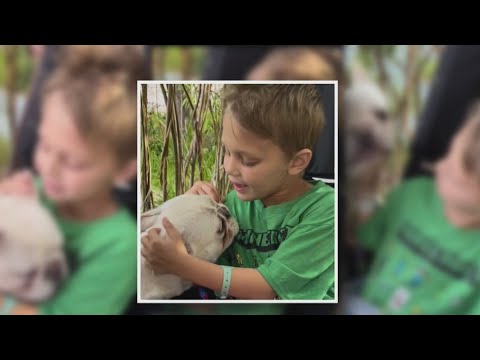 Reminder: Victims of gun violence are scarred for life

Highland Park July 4 shooting victim Cooper Roberts, 8, has a long road ahead of him (35 seconds)

What was it? about 50 days since the mass shooting by a teenager during a 4th of July parade. At that time, most of us have only vague memories of that day. Despite the utter horror of the shoot, it barely stands out in a landscape littered with mass shootings.

After all, the even more gruesome Uvalde school shooting happened just over a month before the shooting in Highland Park. Between the two, there were who knows how many mass shootings. Such shootings are barely reported in our national news these days, it’s such a common occurrence.

As always, not everyone dies in such shootings. There are often many survivors. Some survivors may have lost loved ones. Two-year-old Aiden McCarthy lost both parents in the shooting. To say his life will never be the same again is a huge understatement. It is almost impossible to imagine what his life will be like.

A report came out the other day about eight-year-old Cooper Roberts who was shot in the Highland Park Massacre. Roberts’ family has decided to give regular updates on the boy’s condition. Let’s just say it will have a long line to hoe:

Prior to July 4, Cooper Roberts was almost always active and running around. He enjoyed playing sports — including football, baseball and soccer — and riding his bike, his family said.

Life has been very different since the 8-year-old was shot dead in the 4th of July attack in Highland Park, and left paralyzed. Seven people were killed and dozens wounded by the shooter who shot from a roof in the crowd.

“There are layers and layers of cruelty to being shot by a sniper. Most people do not witness the grueling consequences of surviving these devastating injuries,” Cooper’s family said in a statement Tuesday updating their condition. “He’s an 8-year-old boy who feels hopeless, sad and angry as the reality of his life sets in.”

“He is on a constant intravenous drip of antibiotics to prevent infection, has swelling that obscures the full internal picture and suffers from stomach pain as his body relearns to process mostly liquid food. heavy painkillers,” the update read.

Cooper was recently cleared to start eating solid foods, his family said, but he feels “full and nauseous” after just a bite or two.

It is so hard to believe that there are many people in this country who believe that the suffering of Cooper Roberts and his family and friends is the price of freedom. It’s so sad that elected officials like the radical Republican delegation in Iowa just pretend there’s nothing they can do.

It’s little but selfish malarkey. They take kickbacks from gun manufacturers and then make up their stories to clear their conscience.

To see such carnage taking place that ruins lives and families when something could be done is unfathomable. It is impossible to believe that nothing can be done as the Grassleys, Ernsts, Miller-Meeks, Hinsons, Feenstras and Nunns of the world tell us.

Democrats have a backbone when it comes to guns. Do your part to stop this incredible carnage. Vote for Mayoral Democrats in Congress this fall.