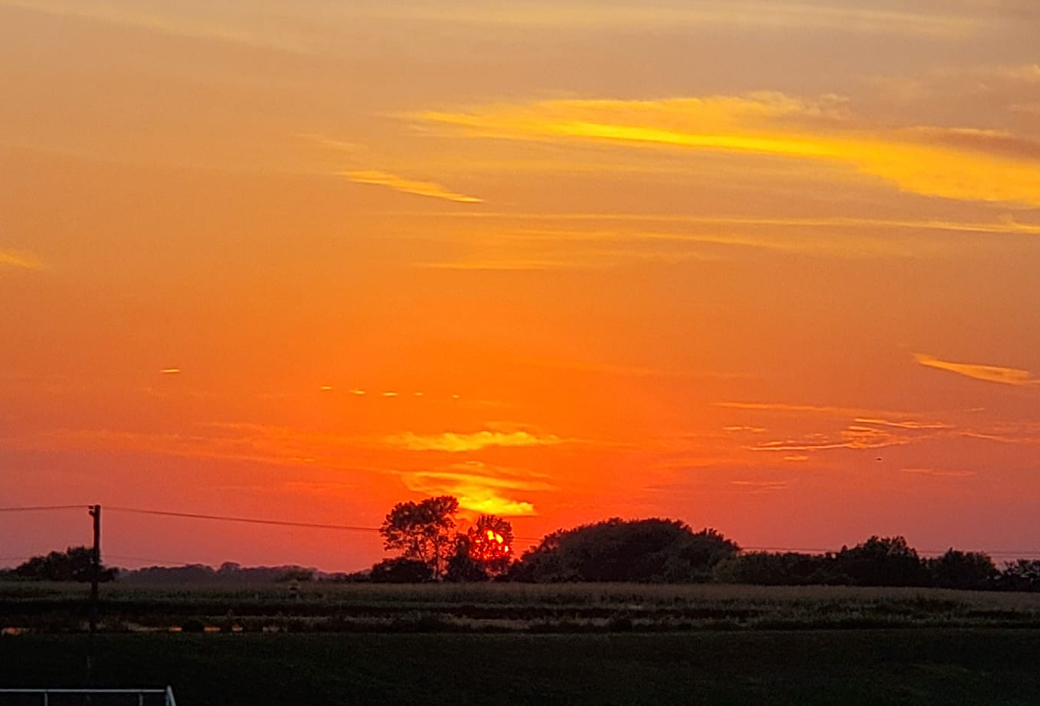 Let’s see if I remember how to do this thing called blogging… it’s been a while.

Happy Monday to you…another warm day is forecast for the region today before a weak cold front moves through the region this evening. This front will shift our winds to the north and allow more seasonal air to move into the area Tuesday night. It will be the last day of the 90s for a while, I think.

The next question is whether storms will erupt with the front and how strong they will be. I’m concerned about the possibility of a derecho forming in eastern IA and NI later today…this could also affect the Chicago area later…but for us the storms could be more scattered in nature. A few however can also pack a punch.

Today: Mainly sunny and even warmer with highs in the lower 90s. Maybe mid 90s on the south side. Chances of a storm increase after around 5 p.m.

Tonight: Thunderstorms are possible until midnight. Early evening thunderstorms may contain hail or stronger winds with a localized risk of severe weather. Lows drop to the lower 60s at dawn

Tomorrow: Good day overall with highs in the mid 80s

Wednesday: Nice with highs again in the mid-80s

Last week I was at a weather conference in Pittsburgh, PA. I hadn’t been there for about 40 years and it’s a beautiful city. It was my first conference with my colleagues in 4 years with covid and all. So it was nice to see old friends again and catch up with other TV weather forecasters. I have new ideas on graphics, etc. that I will sprinkle very often in the shows.

The weekend rain was appreciated. If you follow me on FB (Joe Lauria FOX 4 Meteorologist) you’ve seen the state of what used to be my lovely front yard…end of May at least. No, not so much. I’m about 3/4″ or so. So that’s fine. I went to one of our local wineries on Saturday and they had rushed the grape picking due to the potential for rain…that way the moisture did not settle on or in the grapes at the time of picking. They decided to pick the grapes on Saturday based on the Saturday night forecast. They did the right thing and it will make for better wine I thought it was an interesting convergence between the use of weather forecasts and reality.

Today’s forecast is tied to a cold front moving towards the region during the afternoon and evening. The front this morning is north of the area.

This front will slowly track southward today. Ahead of him, a blast of warm, moist air is entering the area this morning. Temperatures should be between 90 and 95 degrees today. By the way, we hit 95° on Saturday…setting off a few late afternoon thunderstorms north of the I-70 corridor.

This front penetrating the warm, humid air mass will help trigger some instability that will develop throughout the day. Our models that show instability values ​​in the form of CAPE (Convective Available Potential Energy) values ​​show values ​​above 2000-3000, which is quite strong.

Sometimes you can have all this CAPE but there is no trigger. Today there is a trigger and it is the front coming into the region as the CAPE is just sitting there.

We may see a storm or two trying to build between about 4 and 6 p.m.…but more extensive storm coverage is likely after 6 p.m. That said…not all odds are in the action for this…subway and south are the most favored areas for storms to form.

Different versions of the models show initialization between 5 p.m. and 8 p.m.… with different degrees of coverage. We’ll just have to see the environment setup when the tutorial begins. Since this morning, we are at a level 1 or marginal risk of severe thunderstorms. About the metro to the south.

So we’ll be watching for that potential later this afternoon.

The strongest storms may well end up in the Chicago area…and those storms could be big wind turbines. Those are higher wind threats up there in the NW IN

After today, although the forecast appears to be quiet for the rest of the week, it would appear to include a good portion of the upcoming holiday weekend as well. Temperatures can however reach the 90s… which is not too unusual.

So this might be our only chance of rain for a while.

On another note… the tropics are still going through a somewhat quiet phase. Some systems are worth watching, but it looks like nothing will come together over the next two days to be named. It’s a rarity in August and even rarer is the absence of the 1st hurricane of the season before September 1st.

Like I said, there are several things there…one though is the most watched…but it’s really struggling with the shear and dry air being introduced into the system from the north.

My guess is after today…the tropics may be the only thing to talk about for a while.