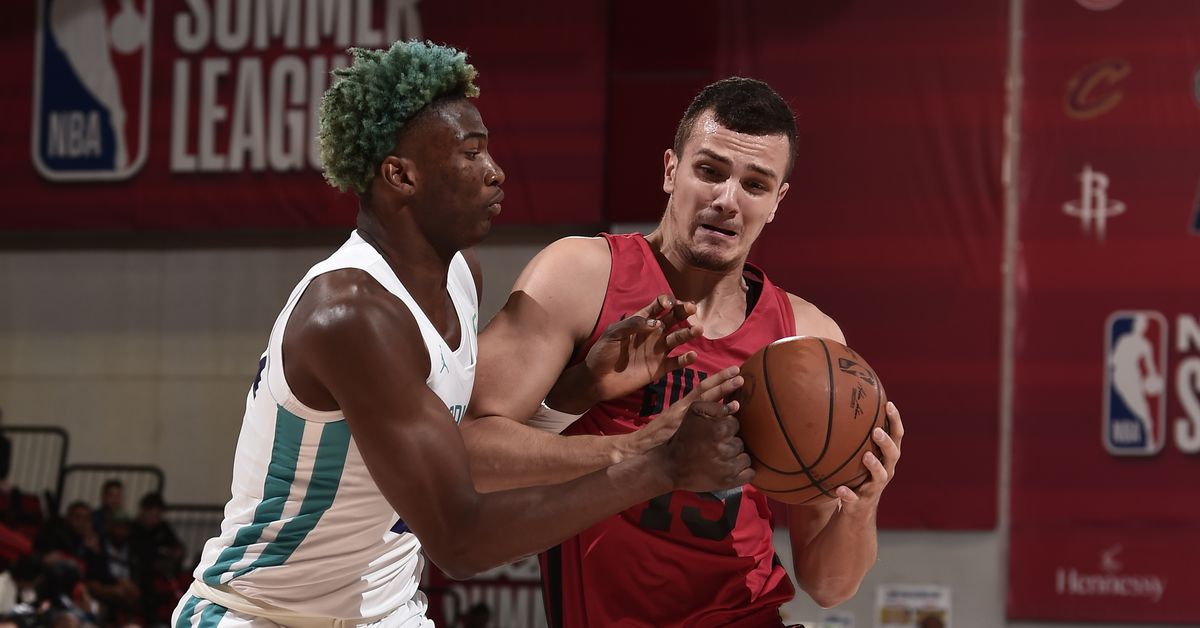 With the win, the Bulls improved their Las Vegas Summer League record to 3-1, despite having maybe two or three NBA-caliber players on their roster.

SummerBulls starting center Marko Simonovic got off to a good start, scoring six of Chicago’s first 10 points as the team traded buckets with Charlotte to kick off the first quarter. Simonovic’s offensive arsenal included a dunk and a turnover scoop. Hornets point guard Jalen Crutcher has been in eight of Charlotte’s first 10.

With the score tied at 10-10, Chicago quickly closed out the frame with a 10-4 tear to finish with a 20-14 margin going into the second period.

Here he proves his mettle on both sides of the ball:

Excellent defense-attack sequence from Dalen Terry. He had a layup from front possession and forced a backcourt violation with a timely double team next time https://t.co/bSyvY341D1

The Bulls really started to pull away from the Hornets in the second quarter, beating the Hornets 22-10 during the frame, thanks in large part to Terry, Windy City Bulls winger Henri Drell and, yes, very good, Malcolm Hill also helped. Hill would eventually finish with 11 points on 4-of-8 shooting plus six rebounds.

Chicago maintained their advantage throughout the third quarter. And soon, your SummerBulls got cocky. Suddenly Summer League MVP (not really) Marko Simonovic was running the floor and nailing passes behind his back:

But your SummerBulls would not be refused, ladies and gentlemen. When the lead dwindled, Summer League head coach John Bryant brought the other four starters (Terry, Simonovic, Hill and Carlik Jones) back to join Lewis and secure the win. Terry, Lewis and Simonovic have all worked in paint. Charlotte was never within one digit of Chicago in the second half.

Perhaps most importantly, Terry finished with his best game of the summer, scoring 20 points on hyper-effective 8-of-12 shooting, mostly cuts. He made his two attempts at long range, to boot. He also had five rebounds, grabbed two steals, grabbed a block and dished out an assist. He was also a defensive threat anywhere on the floor. The Bulls’ other rookie, two-way forward Lewis, went 2 of 7 from the field for six points but also contributed with six boards and two blocks.

Then there was Marko Simonovic. Outside of a (semi-questionable) trip, the 22-year-old Bulls deep-bench big man had another great game in his second stint in Vegas. Simonovic finished with his second double-double in four games, scoring 17 points on 6-of-14 shooting (5-of-7 from the line) and grabbing 13 rebounds. He also gave away four cents to boot, including the aforementioned dish behind the back. Can he actually do this stuff in an NBA game? It was a bit of a rollercoaster for Marko in Vegas, but it was a legitimately solid performance.

The Bulls will play one more game to wrap things up in Vegas on Saturday or Sunday. While they are tied for the top of the standings at 3-1, this nasty loss against the Knicks will prevent them from participating in the championship game.

Sunday Funday – Is this the Fair Season edition?