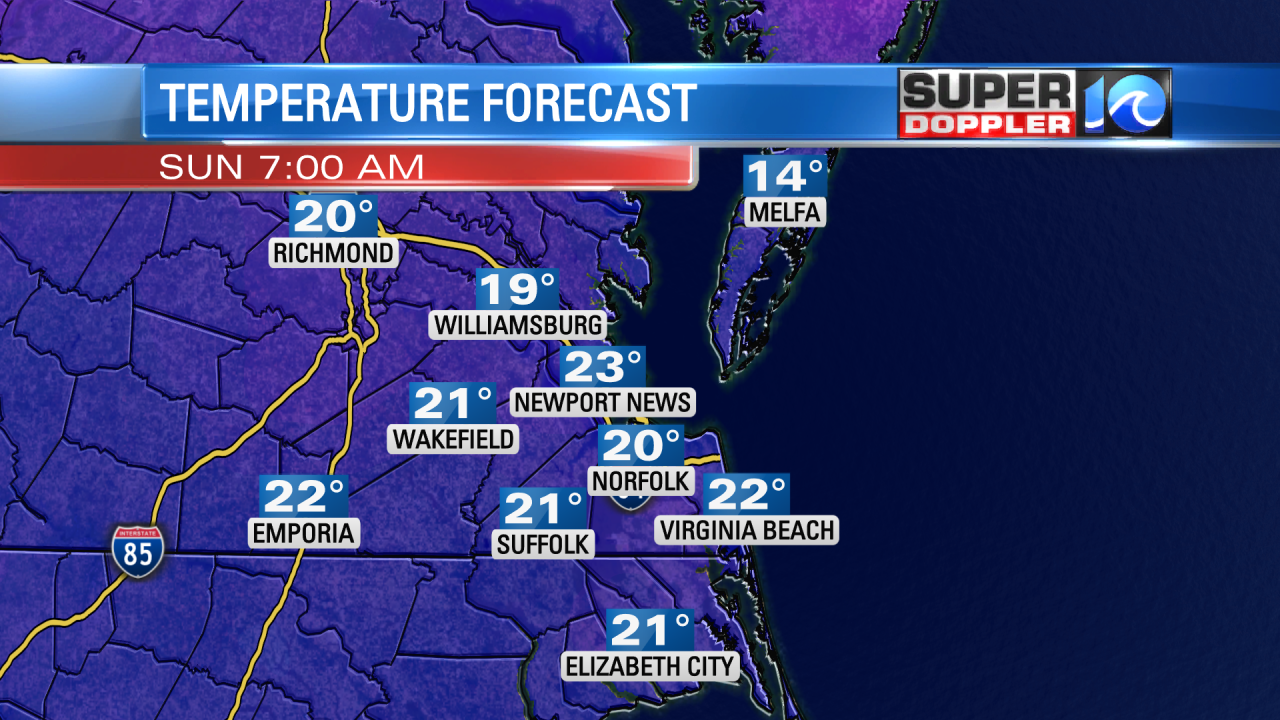 Wow – what a day! It’s not every winter that we can snag two days of snow a week apart! The main headline will be the cold, frigid air setting in tonight, but we at the weather center are optimistic about better days ahead. Better days that can unfreeze us.

Snowfall totals today were exactly as expected – most of us picking up a few inches. What cause some concern, especially on the East Coast. Where Accomack County locations have had over a half foot of snow!

It’s on the east coast where a Winter Weather Advisory remains in effect until 1 a.m. Sunday – blowing snow will likely cause reduced visibility. This is all because the wind is still strong tonight, giving us teenage chills as the freezing cold air pushes through the area.

Tonight’s lows will fall either side of 20° as skies continue to clear.

If your pipes are sensitive to temperatures below 20°C, it wouldn’t be a bad idea to drain the taps tonight, or at least open some of the cabinets along the exterior walls to let in some of the water. warmer air.

After sunrise this afternoon, the roads improved quite quickly as the sleet and snow melted under the bright blue sky. However, temperatures dropped very quickly, before most wet pavement dried out. Expect some slippery spots tomorrow morning. Be extra careful on the roads.

The wind will continue all night before slowly calming down late Sunday morning. If you’re awake at or before dawn, it’ll be pretty close to 10 tomorrow morning (yikes).

Fortunately, the wind calms down and the day becomes calmer. Expect plenty of blue skies and sunshine before a few clouds settle in the afternoon. The highs will be in the 30s (unfortunately) but better days are on the way. The high pressure will move and as it does, temperatures will rebound into the 40s through Monday and Tuesday, then possibly into the 50s on Wednesday and Thursday. Our next bout of rain shouldn’t arrive until the end of the week with a cold front approaching.

After this system mess, enjoy some calm weather this week, and stay warm!