Just days after voters in Cape Girardeau passed a $115,000 bond issue to acquire and improve Harris Field as a municipal airport, Mayor RE Beckman received an offer he could not refuse.

Commanders of Naval Air Station Lambert Field in St. Louis contacted Beckman on April 25, 1947, offering to bring a contingent of combat aircraft to Cape Girardeau to hold an air show at the former training base. army pilots. It would be a way, the commanders said, to help the community celebrate.

Of course, Beckman agreed, and the following Sunday the airfield was packed with people wanting to see the new municipal acquisition and see the mock attack on the base.

A Navy Air Show will be held Sunday afternoon at Harris Field by 18 combat aircraft, weather permitting, Mayor RE Beckman was advised today by the Naval Air Station, Lambert Field, St. Louis. The planes – six Hellcats, six Corsairs and six Avenger torpedo boats, are expected to arrive at 2 p.m. to put on the show in support of the 129th Naval Reserve Division staged here and assisting Cape Girardeau with its new ground d .

The ships will come into formation, then perform tactical maneuvers and, for the entertainment of the crowd, simulate air attack and combat.

Commanders of the Naval Air Station, thrilled with the action of Cape Girardeau residents in the airport bond vote on Tuesday, gladly volunteered to express their appreciation for the community’s air awareness and informed the mayor. Beckman and the Cape Girardeau Airport Council that they wanted to help the community party.

A Naval Reserve Recruiting Unit will be there to assist local Reserve Division Commanders in recruiting men to serve with the team. The division must occupy one of the four hangars on the ground.

All private flights will be suspended during the air show, for safety reasons. The Navy ships will be piloted by experienced military pilots and will be under the direction of Air Group Commander Jesse Taylor.

In addition to the Navy ships, a DC-3 aircraft, a 23-passenger type, will be flown here through an arrangement made by Farmcrest, a new local dairy company, through an arrangement with the Pevely Dairy Co. and Missouri Airways Corporation , a subsidiary of Chicago & Southern Airlines. In this ship, piloted by Captain George Persons and First Officer George Shedd, will be RL “Dick” Barnhouse, President of Farmcrest; Pevely board members Elmer and Daniel Kirchhoff and Pevely sales manager William Kuhn. The plane will carry 500 to 1,000 gallons of ice cream to distribute free to the crowd on the ground.

The plane is of the type used by major airlines and this particular vessel is one of those used in charter service to points like New York and Los Angeles. The flight to Harris Field from Lambert Field will take approximately 28 minutes.

Saturday will also be a busy day in the field, weather permitting. A large number of private planes will fly here under the auspices of the St. Louis Metropolitan Aviation Council to advertise the St. Louis Air Fair to be held May 9-18.

Mayor RE Beckman was informed today that there will be 24 Navy aircraft instead of 18 as originally announced, here Sunday afternoon for an air show at Harris Field. The planes will be over the field at 2 a.m., flown by Navy pilots from Naval Air Station Lambert Field, St. Louis.

The ships will fly in formation and stage a simulated attack on the flying field.

Planes are to include Hellcats, Corsairs and Avenger torpedo boats, the mayor advised. A recruiting team is to be here interviewing candidates for the Naval Reserve.

Cmdt. Milton W. Swan, a native of Wittenberg, Missouri and a graduate of State College, where he was a star athlete, will command the Navy group, and direct operations from the ground, with Lt. Willard Fletcher as PA announcer. In command of the squadron in the air will be Cmdr. Jesse Taylor. Cmdt. Swan and the party will come here in a Navy JRB before the rest of the group, which will arrive at 2 p.m.

The show will continue for about 40 minutes, and the other planes will not land, being too fast for the 2,000 foot runways. All maneuvers will be demonstrated, said Cmdr. Swan, who came here today with Lt. Cmdr. Bart Slattery, public information manager, to organize the show. Navy and Marine Corps pilots will participate.

These photos show part of the crowd attending the Navy Air Show Sunday afternoon at Harris Field. Above the crowd throngs the fence near the runways, in the center three Marine Corsair fighters sweep low “strafe” over the terrain, and below a small private plane takes off in front of the crowd after the air show, the control tower ( is) in the central background. (GD Fronabarger ~ Southeast Missouri Archives)

A large Sunday afternoon crowd, enjoying perfect weather and a yen for a thrill, converged on the Harris Field area, completely shutting down traffic for miles on Highway 61 and congesting the airfield to witness exciting combat maneuvers hosted by Navy and Marine Corps pilots from Naval Air Station, Lambert Field.

Police and city officials came up with various estimates of the crowd going over the 10,000 mark, much of it in automobiles parked on both sides of the freeway and in cars trying to get out of the way. move on the sidewalk between the parked lines. . It was estimated that more than 5,000 people were able to enter the field and after the air show it took almost two hours before all traffic was cleared from the field and the highway. Hundreds of people could not approach within a mile of the field.

The event, a sort of celebration marking the successful passage last Tuesday of the bond issue, allowing the city to acquire and develop the former army air base into a municipal airport, drew the largest crowd ever gathered in this area.

The combat airmen departed Lambert Field and arrived here in formation at 2 a.m., the “attack” on the ground being led from the ground by Cmdr. Milton W. Swan, formerly of Cape Girardeau. First a squadron of Navy Hellcats took off and screamed down and over the crowd in a strafing maneuver, then came a squadron of Corsairs, followed by Avenger torpedo bombers, patrol bombers and Catalina seaplanes. The airmen, obviously thrilled to have the opportunity, now that their fight is over, to once again spread their wings, enjoyed ever-renewed freedom and performed jaw-dropping stunts that left the crowd in awe. A stunt shot down a (Japanese plane). This drew a particular spike of reaction from the crowd. 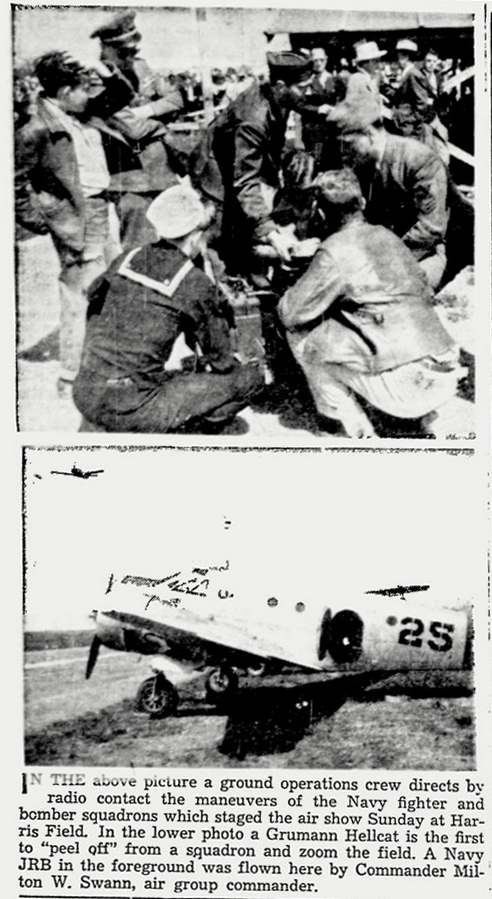 The traffic jam probably got as much talk about them today as the air show. Police Chief John Penn and only one of his officers could be spared the city’s force to handle traffic, which was too much for two men. Mayor RE Beckman said the State Highway Patrol had pledged four men to help direct traffic.

At one point, traffic was blocked near the cement plant on Highway 74 to Highway 61, a distance of about six miles. Estimates of the number of automobiles in the area ranged from 3,000 to 5,000.

Quite a number of cars were parked in the limited space available on the airfield, and many people left their cars on the shoulders of the highway and drove into the field. Thousands more remained in their cars after being unable to get to the pitch.

Members of the Cape Girardeau Airport Board of Directors were on hand and got a glimpse of one of their future issues, providing adequate parking space on the grounds for the crowds attending such events at the future.

The DC-3 aircraft mentioned in the first article can be seen in one of the Missouri archive photos that were not printed in 1947. 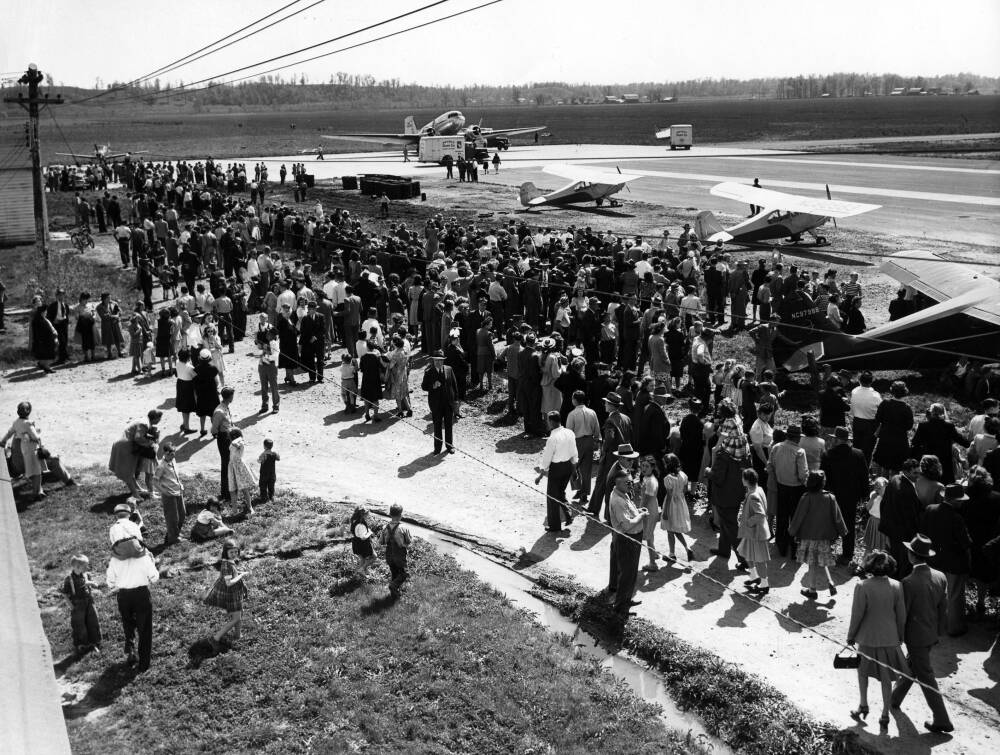 The large machine can be seen in the top center of the photograph, along with two Pevely Dairy Co. trucks.

Mentioning the newly established dairy here offers a glimpse of another story that was happening at the same time in Cape Girardeau. Local dairy farms were being attacked for being unsanitary, and there was a strong public movement for the city and county to hire a milk inspector. Added to this push is a ban by the United States Public Health Service on all locally produced milk and dairy products to boats navigating the Mississippi River. It was a blow not only to dairy farmers, but also to grocery stores that sold supplies to boats. It is estimated that 800 boats purchase provisions from Cape Girardeau annually, including milk. 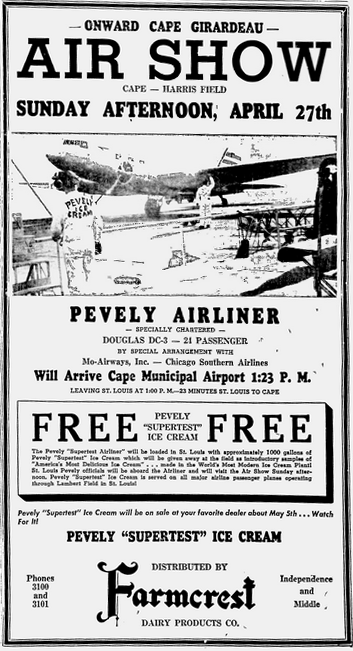