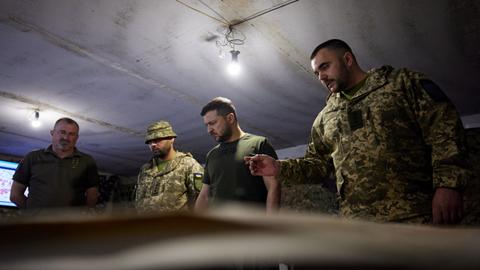 Street fighting between Ukrainian and Russian troops rages in the industrial city of Sievierodonetsk as Moscow strives to conquer Ukraine’s eastern Donbass in a military offensive, now in its 104th day.

Zelensky says battlefield stalemate with Russia not an option for Ukraine

Ukrainian President Volodymyr Zelenskyy has said kyiv will not be content with a battlefield stalemate with Russia and aims to regain control of all of its territory occupied by Moscow.

“We have already lost too many people to just give up our territory,” he said via video link at an event hosted by FT Live, in which he added that a stalemate was “not an option. ” for Kyiv.

Kyiv has previously said Russian forces now occupy about 20% of Ukrainian territory, including swaths to the east and south.

Ukraine has said it opposes any visit by the head of the UN’s nuclear watchdog to its Zaporizhzhia nuclear power plant while it is under Russian occupation.

The head of the International Atomic Energy Agency (IAEA), Rafael Grossi, said his agency was preparing an expert mission to the Zaporizhzhia nuclear power plant, the largest in Europe and now occupied by Russian forces. .

Grossi said on Twitter that the visit was arranged after Ukraine “requested” it. But Ukraine’s nuclear agency, Energoatom, accused Grossi of lying and said it had not given the go-ahead for the visit.

Russia: We have destroyed the artillery of the West

The Russian military said it destroyed several Western-supplied artillery systems in the latest series of strikes on Ukrainian targets.

He said the Russian artillery barrage destroyed other Ukrainian equipment in the east of the country while the Russian Air Force struck Ukrainian troops and concentrations of equipment and artillery positions. .

Before the start of the conflict, only 15% of Ukrainian soldiers were women. Today, tens of thousands more have joined the fight against Russian forces.

TRT World met some of them on the front lines in the city of Mykolayiv on the Black Sea pic.twitter.com/8ICQJIWtZc

The Russian Defense Ministry has denied the arson of the All Saint Skete monastery in Ukraine and also reported strikes carried out Monday evening in Ukraine.

Ministry spokesman Igor Konashenkov denied a statement by Ukrainian President Volodymyr Zelensky about the arson attack on the All Saints Skete monastery in Ukraine by the Russian military.

Konashenkov cited statements from citizens living near the monastery, saying that the Ukrainian army wanted to set up an artillery position on the territory of the architectural monument, but was opposed by secular and religious residents of the region.

Russian President Vladimir Putin has ordered the government to draw up new fiscal rules by the end of July to boost growth and help shield the economy from a severe downturn.

“Work has already started on the federal budget for the next three years…” Putin told a televised meeting.

Russia has prosecuted a dozen army officers after hundreds of conscripts were sent to fight in Ukraine, a military prosecutor has said.

President Vladimir Putin has repeatedly denied that Russia uses conscripts, young men recruited by the state to serve in the military, saying only professional soldiers and officers are taking part in its military operation.

However, the Ministry of Defense admitted in March that some had been sent into combat by mistake.

Ukraine should not be coerced into bad peace deal: Johnson

Ukrainian President Volodymyr Zelenskyy must not be coerced by world powers into agreeing to a bad peace deal with Russian President Vladimir Putin, British Prime Minister Boris Johnson has told his team of ministers.

Johnson, who survived a vote of confidence staged by his lawmakers, told his ministers that Britain would “remain at the forefront” of support for Ukraine, the spokesman added.

The bodies of dozens of Ukrainian soldiers killed at the Azovstal steel plant in the destroyed city of Mariupol have been returned to Ukraine by Russia, Ukrainian officials sayhttps://t.co/kUpMpZSg6b

“The residential areas of the city of Sievierodonetsk have been completely liberated,” Shoigu told a Defense Ministry meeting in a televised address. The Russian army is still seeking to take control of the “industrial zone and settlements closest” to the city, he added.

Pro-Kremlin separatists in Ukraine have confirmed the death of another Russian general during Moscow’s military campaign in the country.

The leader of pro-Russian separatists in Ukraine, Denis Pushilin, expressed his “sincere condolences to the family and friends” of Major General Roman Kutuzov “who showed by example how to serve the fatherland”.

“As long as our generals fight side by side with soldiers, our country and our nation will be invincible,” Pushilin said on the Telegram messenger, posting a black-and-white photo of Kutuzov.

Ports of Mariupol and Berdyansk ready to ship grain: Russia

The Russian Defense Minister said the Ukrainian ports of Berdyansk and Mariupol, seized by Russian forces, have been cleared of mines and are ready to resume grain shipments.

Sergei Shoigu also said in televised comments that 6,489 Ukrainian servicemen had surrendered to Russian forces since the start of what Russia calls its “special military operation”, including 126 in the past five days.

The battles in the Donbass region are in full swing – Governor of Luhansk Serhiy Haidai pic.twitter.com/E619RaPsaX

Fierce battle for Sievierodonetsk in Ukraine

Street battles raged for control of Ukraine’s flagship city of Sievierodonetsk, with the situation changing “from hour to hour”, an official said.

“Our heroes hold their positions in Sievierodonetsk. Heavy street fighting continues in the city,” Ukrainian President Volodymyr Zelensky said in a video address.

Sievierodonetsk – the largest city still in Ukrainian hands in the Luhansk region of Donbass – has been the focal point in recent weeks, and officials described a rapidly evolving situation on the ground.

Russia imposes sanctions on 61 US nationals

The Russian Foreign Ministry has announced that it is imposing sanctions on 61 American nationals.

He said the move was made “in response to increasingly sweeping U.S. sanctions against Russian political and public figures, as well as representatives of domestic businesses.”

Ukrainian President Volodymyr Zelenskyy said the UK was providing the weapons kyiv needed to carry out the offensive with Russia and thanked Prime Minister Boris Johnson for his “full” understanding of the requirements.

Britain said in coordination with the United States it would supply Ukraine with multiple launch rocket systems that could hit targets up to 80km away as part of new British military aid to Kyiv .

“I am grateful to Prime Minister Boris Johnson for his complete understanding of our demands and his readiness to provide Ukraine with exactly the weapons it badly needs to protect the lives of our people,” Zelenskyy said in his nightly video address. .

Tuesday’s headlines: Boroughs chosen to be state’s next U.S. attorney