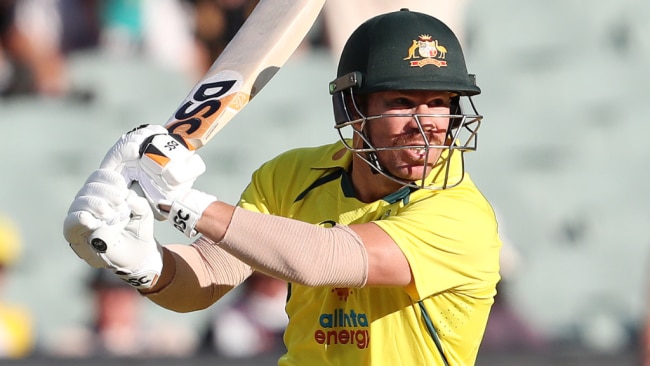 Welcome to news.com.au’s live coverage of the first ODI between Australia and England at Adelaide Oval.

Australia will chase a 288-point target for victory after David Malan single-handedly saved England, who at one point were reeling from a 4/66 after an early collapse.

The 35-year-old scored 134 from 128 balls on Thursday afternoon, slapping 12 boundary and four sixes as England recorded 9/287 from their 50 overs.

It continues a remarkable run of form in the 50 plus format for Malan, who is currently averaging 64.71 with the bat after 10 ODIs.

Pat Cummins and Mitchell Starc kicked off the Aussie series on a flyer, taking three wickets in a damaging new ball spell during Powerplay.

The Australian rapids relentlessly peppered a good length, beating both edges of the bat as England collapsed to 3/31 in the eighth.

Marcus Stoinis took out the dangerous Sam Billings just before the drinks break with a flawless offcut that flew through space and crashed into the middle stump.

England captain Jos Buttler and Malan set out to raise the innings, combining for a 52-run partnership for the fifth wicket before leg spinner Adam Zampa fired the rival skipper in the 24th.

Malan reached his half-century on 64 deliveries, picking up the pace after overcoming the minor milestone, but the southpaw couldn’t find anyone to back him up at the other end.

Liam Dawson was chased away by a direct hit from Ashton Agar after he horribly misjudged a quick single before Zampa pinned T20 World Cup champion Chris Jordan to the LBW plumb back cushion.

Malan reminisced about his second ODI century in the 40th, waving to the modest crowd before continuing the classy onslaught.

He combined with David Willey for a demoralizing 60-run partnership for the eighth wicket before Zampa fired the Centurion in the 46th, caught by Agar at long range.

The Aussies were guilty of missing out on a few chances in the last 10 overs, with Starc missing a return catch before hometown hero Travis Head offered a regulation chance to the thin leg deep.

Australia made five changes to their starting XI from their most recent ODI, with pacemaker Josh Hazlewood sidelined in favor of two strike spinners.

He was stuck on 49 for a while, but David Warner raised his 27th ODI fifty.

The southpaw reached the milestone in just 44 deliveries, slapping seven limits and six.

David Warner’s renewed partnership with Travis Head is off to a flier, with the duo combining for a fifty-race opening stand at Adelaide Oval.

The duo reached the minor milestone in the eighth, giving Australia’s chase a perfect start.

In the seventh, Warner managed to sweep England pacemaker David Willey on a thin leg for six.

The Australian spinner saved five points with an “incredible” piece of ground on the boundary line.

England centurion Dawid Malan slapped a short ball from Pat Cummins to the middle of the deep wicket, where Agar was perched on the rope.

The West Australian leapt into the air and caught the ball with an outstretched hand, only to put the Kookaburra back in play before landing over the boundary.

It may not have created a wicket, but Agar’s athleticism stunned the Fox Cricket commentary team.

“This is modern cricket at its best, what a game from Ashton Agar.”

Hagar having an all time afternoon in the field #AUSvENG

It was a class move from the southpaw, playing a lone hand to save England after an early collapse at Adelaide Oval.

Adam Zampa has another, knocking out England’s Chris Jordan with a flatter, faster delivery that crashed into the back cushion.

A desperate criticism could not save the Englishman.

Liam Dawson was exhausted after horribly misjudging a quick single, with Ashton Agar nailing the direct hit from the point.

No chance of a single one there. An absolute cerebral fade from the Englishman.

“It was a wonderful line-up from Ashton Agar,” former Australian batsman Michael Hussey said in a Fox Cricket commentary.

T20 World Cup champion Chris Jordan is the new man in the middle.

The bizarre attempt at a single by Dawson/Malan ends badly, as Agar throws the stumps at the non-attacking end. Dawson out for 11, and England – 158 for 6 from 30.2 – could struggle to survive 50 overs here.

Some of these shots of Malan were a joy to watch. Serious class. #AUSvENG

England captain Jos Buttler is back in the hangars, with leg spinner Adam Zampa delivering the much-needed breakthrough for Australia.

Buttler sought to get the Aussie tweaker over the covers, but instead offered Ashton Agar a long-term regulatory hold.

Australian all-rounder Marcus Stoinis retired to the sheds after taking a bad knock on the hand in his third game.

It took just two deliveries for Marcus Stoinis to make an impact, knocking out Brisbane Heat rookie Sam Billings for 17 just before the drinks break.

Billings looked to knock the versatile Aussie to the ground, but the ball went over the inside edge and crashed into the middle stumps.

England are now 4/66, with skipper Jos Buttler waltzing through the middle.